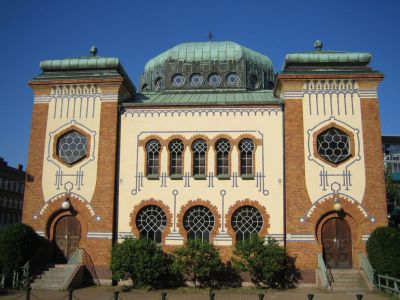 Synagogbyggnaden – Malmo Synagogue – is an Orthodox synagogue, the only one in the city. In fact, this is also one of the few remaining synagogues in Europe built in the Moorish style (mixed with Art Nouveau), same as most of those in Germany destroyed during Kristallnacht (Crystal Night) back in 1938.

The Malmo Synagogue was designed by the local architect John Smedberg, and built and consecrated in 1903. Its outer walls are decorated with lotus flowers, and the number eight, "the Lord's voice", present in the decoration, symbolizes eight days in which the temple was consecrated. Upon its inauguration, this was Malmo's first non-Christian place of worship.

For the synagogue's 100th anniversary, a special Centenary Book was published, called “The Temple Stone fell on Föreningsgatan. Malmo Synagogue's 100 years,” written by Jan Mark and Claes Fürstenberg, with pictures by Merja Diaz.

The synagogue welcomes study visits with an advanced notice.
Image Courtesy of Wikimedia and jorchr.
Sight description based on Wikipedia.