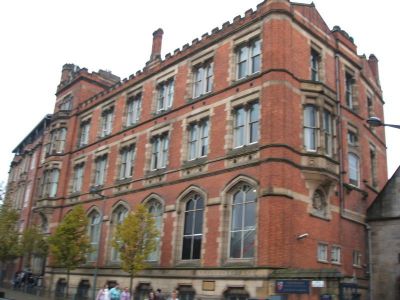 Manchester Castle once stood on a spot just north of Manchester Cathedral, adjacent to the River Irwell. The castle no longer stands, having been replaced in the medieval era by Chetham’s School of Music, which remains in this spot. This medieval building may carry original features of the former castle, and is available to hire as a venue for weddings and conferences. Manchester Castle has been referenced in manuscripts dating from 1184, and was described as a fairly unremarkable fortified timber manor house. Three rings of ditches have been found close to the site, suggesting a network of moats may have once surrounded the castle.

The site of Manchester Castle gives an indication of the reason for Manchester’s enduring success as a settlement, from Roman times to the present day. Military historians have identified the local geography, where several rivers cross paths at the feet of the Pennine hills, as one of the strongest areas of land in England to defend. This may well be the reason for the castle’s location, at the confluence of two rivers next to the medieval township of Manchester. England’s largest city, London, possesses similar geography, which made the site easy to defend from invasion in the medieval era.
Image by Sam Moorhouse on Wikimedia under Creative Commons License.