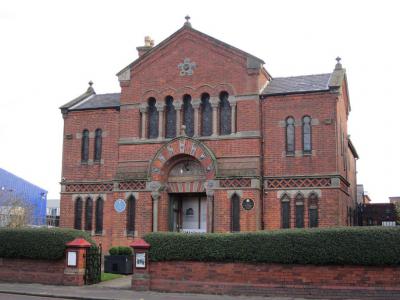 Manchester Jewish Museum is situated in Cheetham Hill, a diverse inner suburb located just north of the city centre. Formerly a Spanish and Portuguese synagogue, the building fell out of use as a place of worship when the area’s Jewish population migrated into Manchester’s outer suburbs. The building opened as a museum for Manchester’s Jewish population in 1984. It was created by local architect Edward Salomons in 1874, and was built in the Moorish Revival style. A homage to the architecture found in Moorish Spain, the decorative frontage of the building was particularly appropriate, given the Iberian heritage of many of the synagogue’s congregation.

The museum is open from 10am until 4pm Sunday through Thursday, except Friday it's open until 1 pm. It is contained entirely within the fully restored former synagogue, and houses a collection of photographs and artifacts covering the history of Jewish life in the city. There are regular talks and events covering the history of Judaism in Europe, and the museum plays a key role in promoting local remembrance of the Holocaust. Manchester Jewish Museum is the only Jewish museum in the UK outside of London, and aims to promote the customs and traditions of the local Jewish population by offering visits to other local Jewish centres, as well as Jewish food and community events.
Image by Rept0n1x on Wikimedia under Creative Commons License.