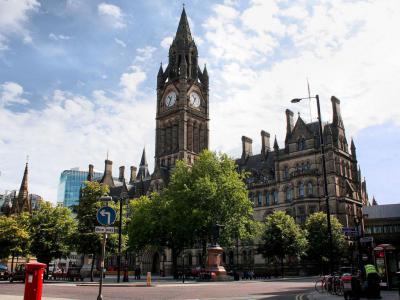 Manchester Town Hall was built in 1877, at the height of the city’s industrial expansion, and is one of the UK’s finest examples of neo-Gothic architecture, designed by architect Alfred Waterhouse.

The history of this industrial northern city is intrinsic to the design and creation of this building. Waterhouse used hard-wearing ‘Spinkwell stone’ to create a structure that could survive the heavy air pollution found in Victorian Manchester. In addition, Waterhouse’s design was chosen due to its clear contrast to the neoclassical architecture found in Liverpool, Manchester’s local rival during the industrial age. The frontage of the Town Hall and Bell Tower form one of Manchester’s most recognisable images, and is covered with ornate sculptures depicting the history of the city.

The extension building was completed in the 1930s to cater for Manchester’s growing need for a larger council office. Together, the Town Hall and its iconic Bell Tower have been described as resembling a miniature version of London’s Palace of Westminster, and even have been used as its substitute in film and TV, including recent productions “State of Play” and “The Iron Lady.”
Image by Robert Cutts on Wikimedia under Creative Commons License.