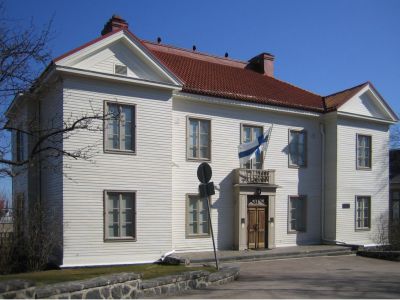 The Mannerheim Museum is centrally located in the city of Helsinki, next to Kaivopuisto Park. The purpose of the institution is to preserve and display information related to the life and work of the famous man by that name, Carl Mannerheim. He was a statesman and member of the Finnish Military.

The building used to be the home of Mannerheim from the 1920s, until his death in 1951. It was built in the year 1874, however. At that time, it was known as the Boman Villa. Interestingly enough, Mannerheim never actually owned the home but rented it for all those years from a man named Karl Fazer. The Museum Foundation finally purchased the home in 1957.

The exhibitions best display the way the home looked during the 1940s. Most of the furniture is original, and the home has many personal items from the famous man. You can view many of the medals and honors he won. Compare all that, though, to the rather Spartan-like manner in which he kept his bedroom – it can tell you a lot about him.

The location receives over ten thousand visitors a year. The fee to get in also includes a guided tour of the building. The tours are done in Finnish, Swedish, English and other European languages.

Why You Should Visit:
To explore and uncover the history of Finland through Mannerheim's fascinating life story.
The house is located in a beautiful area of Helsinki with other big houses (many of which are now embassies) and great views.

Tip:
There's no free roaming around the rooms – it is a guided tour only.
Don't go last minute as being in the last group you might feel rushed out.

Helsinki, the capital and the largest city of Finland, is a multi-faceted place unique in many ways with much to offer to any visitor. While the greater Helsinki comprises peninsulas and large bays, the city center is very symmetrical with well-organized streets and straight boulevards. On this orientation walk you can visit some of Helsinki's not-to-be-missed attractions.