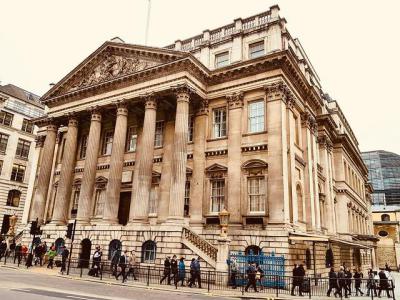 Mansion House is the official residence of the Lord Mayor of London. Designed by George Dance, its construction started in 1739.

The house is used for some of the City of London's official functions, including two annual white tie dinners: the Easter banquet with the main speaker being the Foreign Secretary; and the one in early June, presided over by the Chancellor of the Exchequer who gives the "Mansion House Speech" about the state of the British economy.

Other than that, the Mansion House is also home to The Harold Samuel Collection of Dutch and Flemish 17th Century Paintings consisting of 84 items, plus some other treasures including five ceremonial City of London swords.

In his "Gone Astray" essay, Dickens imagines himself as coming to the Mansion House when a dinner is being prepared and looks in through the kitchen window, feeling that his "heart began to beat with hope that the Lord Mayor, or the Lady Mayoress,... would look out of an upper apartment and direct me to be taken in. But nothing of the kind occurred." Alas...
Image Courtesy of Flickr and Michael Gwyther-Jones.