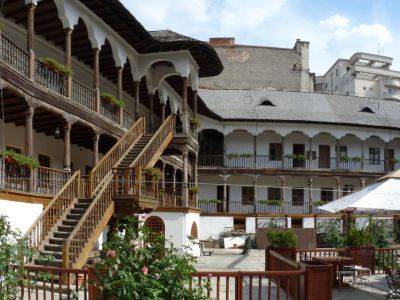 Manuc's Inn is the oldest operating hotel building in Bucharest, Romania. It also houses a popular restaurant, several bars, a coffee-house, and (facing the street) several stores and an extensive bar. Its massive, multiply balconied courtyard hosted many performances and fairs and was a popular place for Romanian Television crews to shoot folkloric performances.

The inn was built in 1808 as a khan, and originally owned by a wealthy and flamboyant Armenian entrepreneur, Emanuel Mârzaian, better known under his Turkish name Manuc Bei. By the middle of the 19th century, it was Bucharest's most important commercial complex, with 15 wholesalers, 23 retail stores, 107 rooms for offices or living, two receiving rooms, and a pub.

The building was nationalized 19 February 1949. Ownership was restored to Prince Șerban-Constantin Cantacuzino in February 2007.
Image Courtesy of Wikimedia and Andrei Stroe.
Sight description based on Wikipedia.