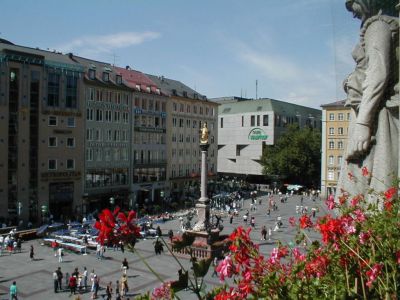 Marienplatz is a square in the heart of Munich that has been the main square of the city since 1158. As such, it was the main venue where public events, tournaments and executions traditionally took place.

First known as Schrannen, the square got to be named Marienplatz after the citizens prayed to the Holy Mother for deliverance from a cholera epidemic. The large column with the gilded figure of Mother Mary on top was erected in 1638 as part of the celebrations marking the end of the Swedish occupation of the city.

The dominant site of Marienplatz, the New City Hall, is a Flemish Gothic style building constructed between 1867 and 1909 by architect Georg Joseph Hauberrisser. The internationally famous Carillon in its tower has the figures depicting history of the city. Those in the lower section, performing Schäfflertanz (“the cooper’s dance”), were installed in 1517 as part of the celebrations of the end of the plague epidemic that swept through the city. The dance shows run daily at 11am, noon and 5pm. Alongside the New City Hall, on the eastern side of Marienplatz, stands the Old City Hall was not demolished and is still in place.

Why You Should Visit:
Ideal location for the very first encounter with Munich. Historic, architecturally attractive and vibrant, filled with people – locals and tourists alike – throughout the day, it never lacks excitement. Also, just like the rest of Munich, it's spotlessly clean.

Tip:
Many walking tours start here in the mornings and afternoons. Join one and learn more about Munich's history and legends.
A tip for eating out is to walk a block or two away, as the prices drop dramatically. The local food market is right outside the gate with many restaurants serving food from all over the world.
Image Courtesy of Wikimedia and Robert Theml.
Sight description based on Wikipedia.