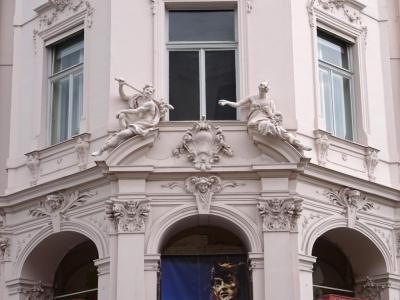 One of the world's oldest puppet theaters in continuous operation, the Salzburger Marionetten has become popular with foreign tourists after being featured in the song, 'The Lonely Goatherd' from the 1965 Hollywood musical, 'The Sound of Music'. Established in 1913, it is a completely unique experience that enchants adults and children alike. Between 20 and 90 puppets are used for each performance, their charm expertly and realistically conveyed by their masters. With an ornate, richly decorated auditorium that incorporates grand lighting, cherubs aplenty and glamorous plaster work, the evening shows here are always authentic and memorable. You get a good view from anywhere, but it is better to pay more and get closer to the front so you can see the details in the marionettes and appreciate the skill with which they are worked.

***MOZART WALKING TOUR***
Many of Mozart's famous operas are in the repertoire, including 'Bastien and Bastienne' (with which the theater debuted in 1913) or the celebrated 'Magic Flute' which can be interpreted on so many levels, as it thinly disguises the major questions of the late 18th century. Why is a prince fit to rule? What is the role of the common man? Why is wisdom so important in a prince? Why is finding love so important? etc. etc.

Why You Should Visit:
The craftsmanship of the marionettes themselves and the artistry of the puppeteers who truly bring them to life in front of you are simply amazing! Expectations of tackiness are surpassed by professional and artful productions in a suitable setting.

Tip:
There are English subtitles to explain what's going on, but it doesn't hurt to be well versed in the story before attending.
Image by PictureObelix on Wikimedia under Creative Commons License.