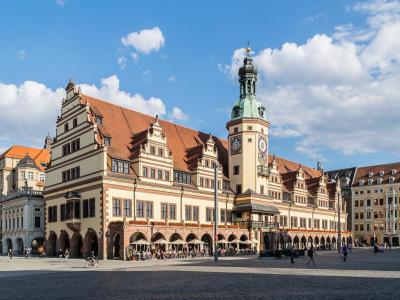 The Market Square of Leipzig is the central place of Leigzip's city center. There are arcades and courtyards well worth a visit, and the Old Town Hall housing the City History Museum is the central attraction. St Nicholas and St Thomas Churches are easily reached from here.

Throughout the year, the square is the venue of a diversity of Markets and events. There is the Easter Market, the Wine Festival, Leipzig Market Music, and the fabulous Christmas Market. Since the 13th century, Leipzig and its Markets have been the most vital centers of trade in Germany.

In 1341, Frederick II, Son of Frederick the Peaceful and Margrave of Meissen, offered the cloth merchants of Leipzig a Romanesque building of their own at the south end of the Leipzig Market Square. This building, called the Cloth Hall (Tuchhaus), shared extensions and spaces with the City Council.

The building complex grew. Two structures were added in the 15th century. A council chamber was completed in 1467. A stair tower emerged in 1476. In 1498, after all the growth and extensions, it was decided to rebuild the Town Hall.

The Old Town Hall was rebuilt in its current Saxon Renaissance style in 1557. It housed the Upper Court and the Court of Aldermen, the city magistrate, council archives, and prison cells. In 1905, it was decided to use the Old Town Hall as the Leipzig City History Museum.

The two-story building is over 300 feet long. It has a steep roof with 13 connecting row dormers and staggered gables. A stone arcade faces the square. An octagonal stair tower is next to the main entrance. The entrance is flanked by two ionic columns topped with the gaff heads of the master builders. Stone box oriels are on the gable ends.

In the large ceremonial hall is a portrait of Johann Sebastian Bach by German painter Elias Gottlob Haussmann. Haussmann also signed Bach's employment certificate as a cantor at St. Thomas' Church. There is also a scale model of the city in 1832 made by Leipzig upholsterer and furniture maker Johann Christoph Merzdorf.
Image Courtesy of Wikimedia and Krzysztof Golik.