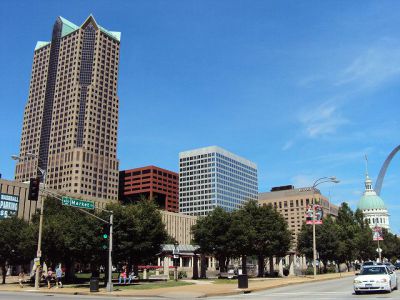 Running east-west from Memorial Drive by the grounds of the Gateway Arch to Compton Avenue in Midtown, Market Street is the main thoroughfare in St. Louis and the usual site of local parades and public festivals. Lined by prominent buildings, half way along, the street opens out into St. Louis Memorial Plaza. On its left-hand side is the gigantic rotunda of the Busch Stadium, which has seating for 50,000 spectators. The stadium is home to the St Louis Cardinals, the city's baseball team, whose history is documented in the St Louis Cardinal's Hall of Fame. The neighboring National Bowling Hall of Fame does the same for bowling.

Downtown, the street forms the southern boundary of the Gateway Mall, and further west in Midtown, it borders Harris-Stowe State University. There is also a small stretch of Market Street, running between Prospect Ave. and South Vandeventer Ave., which houses the old armory of the 138th Infantry building and the old Famous-Barr warehouse.
Image by Paul Sableman on Flickr under Creative Commons License.