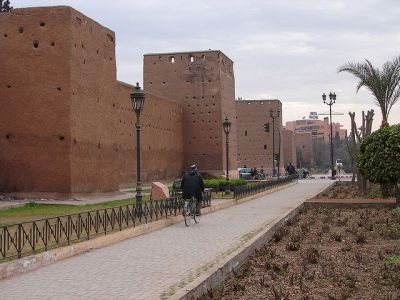 The Marrakech medina walls, or ramparts, are massive: about 19 km in length, 9 m high by 2 m thick. Built in the 12th century as fortification to defend the city from the foes living in the High Atlas mountains, they look as if made of stone, whereas in reality they are made of a pinkish mixture of earth, stone and lime on a wooden structure. This might not seem very solid for a defensive structure, but the huge blocks of stone were difficult to come by in those days and, in any case, the walls were frequently repaired. Even today, one can notice the numerous square holes left from scaffolding during restoration works, which doesn't seem to make the experience any less appealing.

During the Almohad dynasty, each of the 19 gates of the Medina had massive doors of cedar studded with iron, which were shut at night. As the city outgrew its walls, they were extended to the north and south in the 16th century. You can walk or cycle along the exterior of the ramparts, but regrettably, you cannot access the top.

The best time to see the walls is at sunset when they seem to glow in the reddish light. The walls and the gates are open at all times and lit at night.

Why You Should Visit:
Some of the best-preserved and most photogenic walls to be found in the whole Arab world.

Tip:
Automobile traffic through the gates can be hectic, so take care when crossing the street or taking pictures.
One of the best ways to view the walls is by riding a horse-drawn carriage, available from Jemaa el-Fnaa square (the tour takes about an hour). Negotiate a sensible price ($15-$25) before you get in the carriage to avoid arguments. Leave a tip and you'll be surprised at the response.
Image Courtesy of Flickr and gripso_banana_prune.