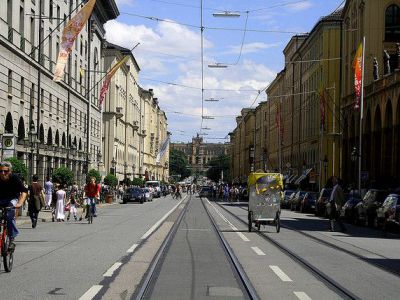 Maximilianstraße is one of Munich's four royal avenues, along with Brienner Straße, Ludwigstraße and Prinzregentenstraße. It starts at Max-Joseph-Platz, home to the Residenz and the National Theatre, and runs east-west.

The street was planned and begun in 1850 by King Maximilian II of Bavaria, after whom it takes the name and whose statue, the Maxmonument, sculpted by Kaspar von Zumbusch in 1875, is found in the the eastern part of the avenue. Another “Maximilian” thing is the Maximiliansbridge with the statue of Pallas Athene, built in 1857-1863, as an extension of Maximilianstraße to the Maximilianeum.

With this project, the king aimed at "inventing" a new architectural style which would combine the best features of historical models with the then latest construction technologies. The avenue is framed by mostly Neo-Gothic buildings influenced by the English Perpendicular style.

In line with the concept, north facade of the Old Mint Yard, facing the National Theatre, got its Neo-Gothic appearance. Other notable sites along the street include the Schauspielhaus (1901), the Upper Bavaria district administration (1856–1864), the Museum Fünf Kontinente (Museum of Ethnology, 1858–1865), and the Wilhelmsgymnasium (1875–1877).

The western portion of Maximilianstraße is devoted to shopping and high living, packed to the brim with galleries, designer shops, luxury boutiques, jewellery stores, and one of Munich's foremost five-star hotels, the Hotel Vier Jahreszeiten (Kempinski, built by Rudolf Gottgetreu, 1856–1858). Famous brands like Gucci, Bulgari, Louis Vuitton, Dior, Chanel, Versace and other big names have established their presence here, increasingly ousting the traditional shops, art galleries and restaurants. Today, Maximilianstraße has the distinction of the highest retail rents in Germany.
Image Courtesy of Flickr and FotoVero84.
Sight description based on Wikipedia.