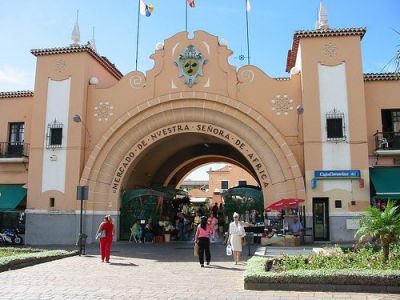 By the ornate entrance arch of the Market of Our Lady of Africa are two sculptures. First, La Lechera ("Milkmaid"), is a shoeless woman hurrying along, a jug in one hand while supporting with the other hand a basket of dairy products on her head. It is in honor of the generations of hard-working milkmaids of Tenerife.

The second sculpture, Homenaje Al Chicharrero ("People of Santa Cruz"), is of two fishermen launching a boat in the surf. The main catch in the old days was horse mackerel, locally known as "chicharos." At one time Santa Cruz was a fishing village. It produced poverty and fish, and was generally looked down on by folks in the city.

The Market of our Lady of Africa is dedicated to food and the people who produce it. Founded in 1944, it is housed in an exotic building of arches and patios with Latin American and Moorish touches. A minaret-like clock tower announces the location of the market. For drivers, there is underground parking with stairs to the market.