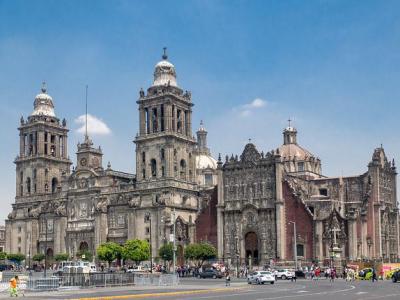 Dominating the Zocalo in Mexico City, the Catedral Metropolitana is the oldest and largest cathedral in Latin America. The church is also called the Metropolitan Cathedral of the Assumption of Mary of Mexico City. Over the centuries the cathedral’s foundations have sunk into the soft soil beneath and, as a result, the cathedral and the nearby chapel did not have a level floor. The efforts of Mexico City’s administration led to its extensive reconstruction and by the year 2000, the structure was removed from the World Monuments Fund’s list of the 100 most endangered sites.

Catedral Metropolitana was built over the location of the destroyed Aztec palace of Moctezuma. The material used during its construction was from the destroyed palace. The design of the cathedral has several architectural styles including baroque, neoclassic and Churrigueresque. Spanish architect Claudio de Arciniega drew up the initial plans for the structure. The foundations of the building were laid in 1567 and completed in 1788.

The church is filled with paintings, altarpieces and colored statues by well known Mexican artists and sculptors. The cathedral has two bell towers with 25 bells and two of the largest 18th-century organs in the Americas. A sound and light show, with a focus on choral music, takes visitors on a candlelit walking tour around the cathedral.

Tip:
It's a functioning cathedral so be mindful of that, and try to avoid mass.
If you'd like to enjoy a once-in-a-lifetime view of El Zócalo and the Cathedral, whether its an early breakfast or a late dinner (the latter allows you to dine when the square is beautifully lit up), have a fairly-priced meal on the balcony of a restaurant called "Balcon del Zocalo", located near the Cathedral on the 6th floor of the Zocalo Central Hotel. Eating a nice meal while looking at the National Cathedral from this perspective is an incredible sight to see!

Chapultepec Park is one of the most famous parks in Mexico City. It is located on the Chapultepec Hill, that has a major historic importance for Mexicans. This park features some of the best known tourist attractions in Mexico city, like the Tamayo Contemporary Art Museum, Chapultepec Castle, and Papalote Children Museum. Take this walking tour to explore Chapultepec Park.