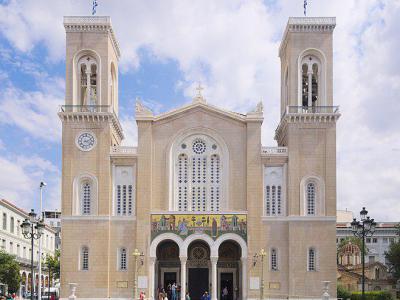 This cathedral church, more popularly known as the "Metropolis", has recently been cleaned, restored and reopened to visitors. The interior decoration, with elaborate icons, decorations, and detailed murals, is beautiful and a great example of Greek Orthodox faith.

Construction of the church began on Christmas Day, 1842, with the laying of the cornerstone by King Otto and Queen Amalia of Greece. Workers used marble from 72 demolished churches to build the structure's immense walls. Three architects and 20 years later, it was complete.

Inside are the tombs of two saints killed by the Ottoman Turks during the Ottoman period: Saint Philothei and Patriarch Gregory V. In the Square in front of the Cathedral stand two statues of the last Byzantine Emperor, killed defending Constantinople against the Turks, as well as of the World War II Archbishop who worked to save Athens' Jews from the Nazi persecution. The square itself is much quieter than Syntagma Square and is a great spot to escape the bustle while having a drink in one of the cafes.