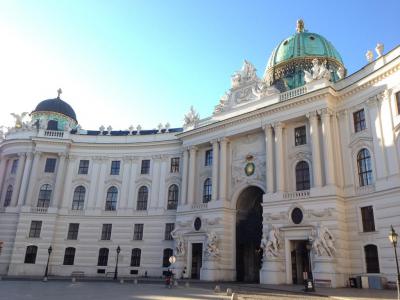 Michaelplatz is a square in front of The Hofburg Imperial Palace. As you enter, you can't help noticing the impressive Neo-Baroque Michaelertor (Michael’s Gate) leading through the Michaelertrakt to the Hofburg’s inner courtyard. On both sides of the doorway are 19th-century fountains, created by Rudolf Weyer.

Opposite the gate is the grand Michaelerkirche (St Michael's church), formerly the parish church of the imperial court and one of the oldest Baroque churches in the city which lends its name to the square itself. The earliest parts of the church date back to the 13th century; according to legend, the Michaelerkirche was built in 1221, yet its present form originated in 1792. The porch is topped by Baroque sculptures depicting the Fall of the Angels. Inside are Renaissance and 14th-century frescoes, and a vividly carved, gilded organ (1714) by Johann David Sieber, the largest in Vienna, once played by Joseph Haydn. Off the north choir is the crypt entrance. In the 17th and 18th centuries, parishioners were often buried beneath their church. Well preserved bodies clothed in their burial finery can still be viewed in open coffins.

At the center of the square there is a viewing spot for an excavation of a Roman encampment. There are also some old Medieval foundation walls to be seen, plus the remnants of the old Burg Theater.

In contrast to this, overlooking Michaelerplatz, opposite the Michaelertor, is one of the most modern buildings in Vienna, called the Looshaus. Designed by Adolf Loos, it is now famous, although, back in the day, it was considered an eye sore for its rather simple, unadorned design. So much so, in fact, that when completed in 1912, the building caused so much outrage on the part of the Emperor Franz Joseph who declared that he would never use the Michaelertor ever again. The source of his indignation was the building’s starkly functional upper facade contrasting dramatically with the nearby fine ornate Baroque architecture. Today, the Looshaus is a working bank, but visitors are allowed into the lobby to view the elegant interior, which is richly clad in polished timber, green marble and mirrors.

Sitting just across from the Looshaus is the Palais Herberstin. Built in 1896, it replaced an older building that used to be a popular meeting spot for young writers and artisans. The old cafe, called Griensteidl, has been rebuilt in the new structure, though much of its regular crowd have moved to Café Central in Palace Ferstel.

Why You Should Visit:
Main entrance to the historic center of Vienna, there's just so much to see and enjoy – grand architecture or just a cup of coffee.

Tip:
Doing one of the horse-drawn carriage tours is highly recommended, a great way to see the central part of Vienna and worth the money.
Image Courtesy of Flickr and Andrew Nash.