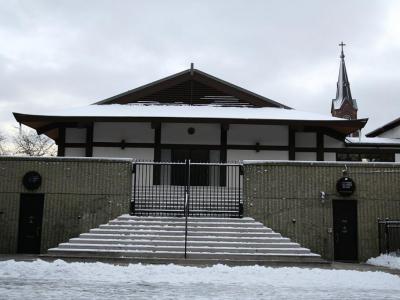 Buddhism varies quite a bit by nationality, sect, ethnicity, and geography. This is a Buddhist temple of the "Pure Land" sect, founded by Japanese-Americans fleeing the growing scapegoating racism of the American West during WWII. The American Midwest was relatively more tolerant, but some of the idiosyncrasies of this sect's practices also contributed to blending in with a minimum of conflict.

The temple is set up more like an American Protestant Church with Japanese architectural influence (primarily expressed in the combination gable and hip roof), rather than a traditional Japanese mainstream temple – you keep your shoes on and sit in Western-style pews, Sunday morning services are conducted by ministers instead of monks, Dharma talks mimic homilies or sermons, the opening chant is the only Japanese for the English services, and some of the hymns are actually Protestant traditional hymns with adjusted words.

A visit to this temple is especially recommended to those interested in comparative religion, anthropology, immigration history, cross-cultural studies, and members of any other Buddhist group.

Tip:
Look for the Ginza Holiday Festival on the 2nd week of August, the annual fundraiser featuring delicious Terriyaki chicken, goods for sale, and fantastic entertainment with Taiko drums.
Image by Alberto Aldana on Wikimedia under Creative Commons License.