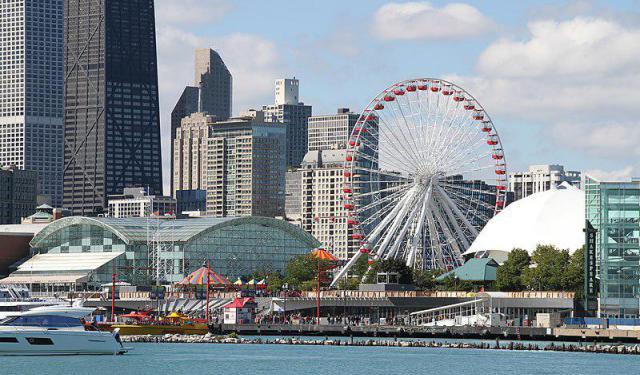 Additional to scenic views of the lake, the boats, and the city skyline, the Navy Pier offers a variety of attractions on the waterfront – for kids as well as adults – that draw nearly ten million people annually, making this Chicago's most visited spot. Yes, some may see it as a “tourist trap”, but it is worth the time and money to spend some time here, so take this self-guided walk to make your visit easier to navigate.

Significant permanent attractions include the convenient and spacious Family Pavilion – home to the world-class Children’s Museum as well as the spectacular Crystal Gardens with their water features and gigantic plants under a dome; the ride up the Centennial Wheel with unbelievable views from above; seeing a play at the Shakespeare Theater (check to see what’s on!) or going through the Funhouse Maze (fun for most ages – even the ‘big’ kids will embrace it).

From May through October, the Miller Lite Beer Garden is Chicago's go-to destination for free, live, outdoor music performances. Couple this with free fireworks on Wednesday, Friday and Saturday and you have a perfect free evening!

As an added treat, the Navy Pier Auditorium affords beautiful views over the lake in one direction and the Chicago skyline in the other – best taken in from the bright and airy Offshore Rooftop and Bar atop the Festival Hall.

Pick a day with good weather and join us on our tour around the Pier to make the most of your experience.
Image Courtesy of Wikimedia and Tony Hisgett.
How it works: Download the app "GPSmyCity: Walks in 1K+ Cities" from iTunes App Store or Google Play to your mobile phone or tablet. The app turns your mobile device into a personal tour guide and its built-in GPS navigation functions guide you from one tour stop to next. The app works offline, so no data plan is needed when traveling abroad.

One of Navy Pier's main areas, the Family Pavilion is home to the recently renovated Chicago Children's Museum, an IMAX Theater, the Crystal Gardens indoor botanical park, and numerous restaurants and shops.

The Children's Museum is one of the most popular family things to do in the Navy Pier. Following a major overhaul, it has a new less cluttered appearance while remaining interactive, age-appropriate, engaging, and fun. There so are many areas to play in and so many events/workshops at different times of the day, that most will not even have time to cover them all. Highlights include the fire station area (always a big hit!), the art studio (where kids get to make their own costumes and bring them home), the building station (where they create their own structures), and everything in between: from climbing to finding hidden objects, fishing, making sounds, and many more. A 1:1 adult-to-kid ratio is pretty important here since there are several levels and the different exhibits appeal to different ages.

The adjacent Navy Pier IMAX Theater features Chicago's largest flat movie screen, and one of the largest in the world at 60 feet high and 86 feet wide. This is the place to go if you want the real IMAX experience, as it was purposely built and equipped for the increased perspective of the wide IMAX picture, giving a fantastic view from practically every seat.


Image Courtesy of Wikimedia and Ronincmc.
2

If you want to take a few minutes and just take in some of the pretty palm trees and water installations, this is a place to get away, sit by a bench, and watch Mother Nature under a glass dome. Large, airy and air-conditioned, it is relatively quiet compared to the rest of the pier; a comforting, photogenic slice of the tropics inside the iconic Navy Pier, on the second floor. There is no other place in Chicago where you can get views of Lake Michigan, the Chicago skyline, and the Navy Pier's Centennial Wheel while enjoying beautiful tall palm trees – and all for free.

Tip:
The Centennial Wheel is easily accessible from the site; ask for directions if needed.

One of the Navy Pier's biggest draws, this new and improved Centennial Wheel is an iconic part of the Chicago skyline and a treasured piece of Chicago cultural history. Zooming you 200 feet over the city skyline and Lake Michigan in comfort, this is a very cool experience especially if you book it on a Wednesday or Saturday night when fireworks are featured at the pier. Each air-conditioned gondola fits up to eight people and as the ride comprises three loops, there is time enough to admire the sights and take good pictures of the entire city.

Tip:
Other nearby rides include the Wave Swinger, the Light Tower and the Carousel, which operate from late spring through early fall, weather permitting.

For top-shelf professional entertainment in a beautiful facility, head to the Shakespeare Theater, always hosting the most amazing troupes from around the world with unrivaled quality. Very intimate and personal, this theatre is not a very traditional Shakespeare experience either, so, therefore, it is reasonable to expect modern scenery and costumes, as well as a diverse set of actors whose credits usually extend beyond regional theater to television, film and stage productions in other big cities. Often this complements the play, but don't be shocked if it seems wacky – just laugh out loud with everyone!

Tip:
There are no bad seats in the house, aside from the few that are along the sides (avoid the balcony) and very close to the front of stage.
Image Courtesy of Flickr and Tracie Hall.
5

This mirror-filled walking maze leads you on a disorienting, 15-to-20-minute journey. Expect spinning lights and startling sound effects, a variety of little sections to navigate and a few super cool elements. It is an ideal rainy-day attraction, and you can take your time while exploring.

Tip:
Bringing sensitive kids 10 and under is not usually recommended.

From May through October, the Miller Lite Beer Garden on Navy Pier is Chicago's go-to destination for free, live, outdoor music performances. Couple this with free fireworks on Wednesday, Friday and Saturday and you have a perfect free evening!

Music frequently starts early with more than one band and there is plenty variety of beers, cocktails and summer snacks to match. Recent renovations in the area have also widened the walkway making it more comfortable to stroll by the docked boats, and there are many places for the picnic lunch you've planned as well as great views from tables looking out over Lake Michigan and its boats of every imaginable size.
Image Courtesy of Flickr and Bernt Rostad.
7

Constructed in 1916 and strategically placed near the water for extra added enjoyment, the Navy Pier Auditorium consists of the Festival Hall and the Aon Grand Ballroom. While the former is dedicated to trade shows and exhibitions, the latter – with its sweeping 80-foot domed ceiling and elegant decorum – capitalizes on timeless architecture. Reminiscent of the Radio City Music Hall in New York City, this massive structure is stunningly beautiful! As an added treat, visitors get beautiful views over the lake in one direction and the Chicago skyline in the other – best taken in from the bright and airy Offshore Rooftop and Bar atop the Festival Hall.
Image Courtesy of Wikimedia and Tony Hisgett.