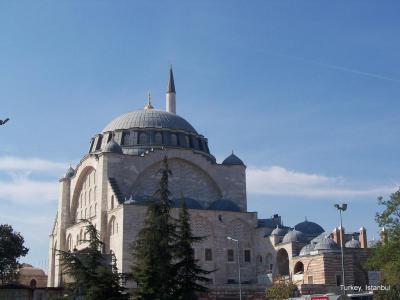 The Mihrimah Sultan Mosque is one of the most beautiful sites in Üsküdar and indeed in wider Istanbul, its proximity to the iskele (pier) lending it the nickname of 'Iskele Mosque'. Since it was built on a raised platform, the grounds provide a great vantage point from which to observe the pier area as a whole, complete with all its hustle and bustle.

The mosque itself is the first of two built by Mihrimah Sultan, the most favored daughter of Suleiman the Magnificent and the wife of Grand Vizier Rüstem Pasha. Built between 1546-48, it was designed by the great architect Mimar Sinan, whose blend of Ottoman and Byzantine architecture can be seen in the slender minarets, as well as the arrangement of the dome and semi-domes. The colorful cut glass windows inside convey a sense of happiness and femininity.

In the absence of space for a full courtyard, Sinan added a roof to cover the ablution fountain, giving the construction yet another element of individuality. As a place of worship, the mosque is served well by its location, which supplies a healthy amount of passing commuters in addition to the local population.
Image by PlanetKorriban on Flickr under Creative Commons License.