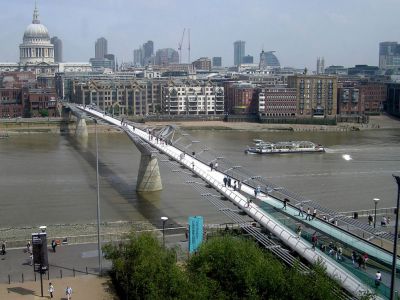 The Millennium Bridge has three claims to fame: it is the newest bridge to span the Thames; it is the only pedestrian-only bridge in London and it holds the record for being the bridge with the shortest opening-closing time in history, as it was closed only two days after being inaugurated.

The bridge was designed, as its name suggests, to be opened in 2000, the start of the 21st century. In 1996 Southwark Council held a competition and invited architects from all over the world to design a new bridge that would reflect the new century and the future. The designs proposed by Foster & Partners and Ove Arup & Partners won the competition and work on the new bridge began in 1998.

The startlingly modern suspension bridge is 325 metres long with 8 suspension cables, built deliberately low to avoid spoiling the view of St Paul’s Cathedral on the North bank of the river. These cables are tensioned to pull with a force of 2000 tons against the piers set into each bank.

The bridge was opened on 10th June 2000 with an organised walk for the Save the Children Fund. The walkers noticed that the bridge had a strange swaying motion – they said that the bridge “wobbled”. The bridge was closed two days later and didn’t reopen until 2002 when the problem, called Synchronous Lateral Excitation, was solved by the introduction of 32 fluid-viscous dumpers to control the horizontal movement and 52 tuned mass dumpers to control the vertical movement of the bridge.

*** Harry Potter Movie ***
Known colloquially as the “wobbly bridge,” the Millennium Bridge had to undergo further modifications to mend the structural faults discovered during its initial use, seeing the pedestrians fall over as they tried to cross it! Perhaps it was due to that association that the filmmakers decided to show it as targeted by death eaters in the screen adaptation of “Harry Potter and the Half-Blood Prince” instead of the Brockdale Bridge whose collapse occurs in the book.

Fortunately, dramatically destroyed in the horrific opening scene, where it snaps and breaks after the death eaters rip through London leaving behind a path of destruction, the now iconic Millennium Bridge was not harmed during filming and you can have fun safely walking on it today

Why You Should Visit:
Ideal link from Tate Modern and Globe Theatre on one side to the St Paul’s Cathedral, conveniently placed if you have a walk between the banks.
A great pedestrian-only bridge to walk on and very picturesque with St Paul’s Cathedral in the background.

Tip:
Wear comfortable shoes. Take an umbrella or a rain-proof jacket, just in case.
Also, note the paintings or stickers that are on the floor of the bridge.