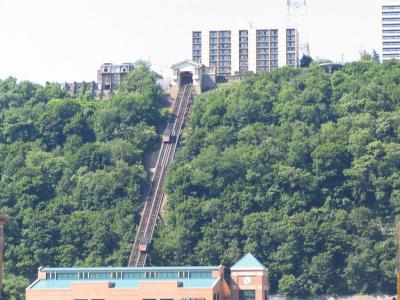 Built in 1870, the Monongahela Incline is the oldest continuously operating funicular in the United States. It is also one of two surviving inclines (the other is the nearby Duquesne Incline) from the original 17 passenger-carrying inclines built in Pittsburgh starting in the late 19th century.

Pittsburgh's expanding industrial base in 1860 created a huge demand for labor, attracting mainly German immigrants to the region. This created a serious housing shortage as industry occupied most of the flat lands adjacent to the river, leaving only the steep, surrounding hillsides of Mt. Washington or "Coal Hill" for housing. However, travel between the "hill" and other areas was hindered by a lack of good roads or public transport.

The predominantly German immigrants who settled on Mt. Washington, remembering the seilbahns (cable cars) of their former country, proposed the construction of inclines along the face of Coal Hill. The result was the Monongahela Incline, which opened on May 28, 1870.

Today the Monongahela Incline is operated by the Port Authority of Allegheny County, which also operates the of Pittsburgh's transit system, mainly as a tourist attraction. The Monongahela Incline takes visitors to the top of Mount Washington where they enjoy a spectacular view of the downtown Pittsburgh and beyond.
Image Courtesy of Flickr and Brent Moore.
Sight description based on Wikipedia.

Want to visit this sight? Check out these Self-Guided Walking Tours in Pittsburgh. Alternatively, you can download the mobile app "GPSmyCity: Walks in 1K+ Cities" from iTunes App Store or Google Play. The app turns your mobile device to a personal tour guide and it works offline, so no data plan is needed when traveling abroad.