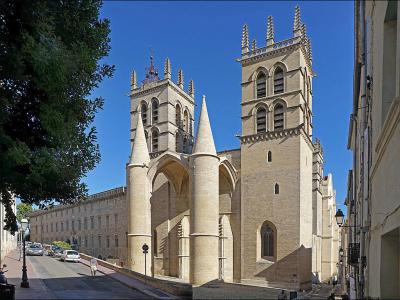 Saint Peter's Cathedral is the enlargement of the former Benedictine convent chapel dedicated to Saints Benedict and Germain, founded by Pope Urban V in 1364. The chapel became a cathedral in 1536. The building is in the center of the old town. It is a Gothic style version of a medieval "fortress" cathedral.

Four imposing towers are set at the corners of the nave. Before the entrance is a great porch supported by two massive cylindrical pillars topped with inverted cone-shaped spires. The pillars are connected to the facade by a vaulted roof. The main entrance itself is flanked by two pilasters with conical tops.

The church is a single vessel with one nave. There are five bays harboring 14 side chapels. The chapels are dedicated to: Our Lady, Saints Germain, Victor, Cecilia, Martin, Catherine, Peter, Magdalene, Lazarus and Michael. We must also not overlook Saint Ursula and the eleven thousand virgins, the Holy Cross and Saint Blaise.

The high altar is veiled with a vermeil altarpiece. There are two sacristies, major and minor, containing books, relics, reliquaries and sacred vessels. There are relics of Saint Germain and Saint Blaise and Saint Benedict's silver arm.

In 1906 the cathedral was classified as a historical monument. In 2002, by decree of the Congregation of Bishops, it became a metropolitan cathedral.
Image Courtesy of Wikimedia and Jean-Pierre Dalbéra.