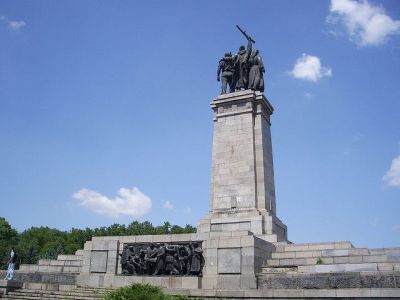 Monument to the Soviet Army, Sofia (must see)

The Monument to the Soviet Army (Bulgarian: Паметник на Съветската армия) is a monument located in Sofia. There is a large park around the statue and the surrounding areas. It is a popular place where many young people gather. The monument is located on Tsar Osvoboditel Boulevard, near Orlov Most and the Sofia University. It represents a soldier from the Soviet Army, surrounded by a woman and a man from Bulgaria. There are other, secondary sculptural compositions part of the memorial complex around the main monument. The monument was built in 1954.
Image by Neil Carey on Flickr under Creative Commons License.
Sight description based on wikipedia