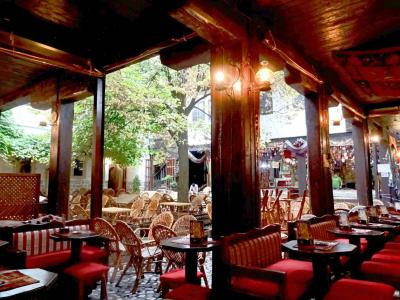 Morića Han is a han (that is, a roadside inn) originally built in 1551 in Sarajevo. After a fire in 1697 it was reconstructed in its current form. Morića Han is one of the buildings which were financed by and belonged to Gazi Husrev-Beg's endowment (Vakuf). It is the only surviving han in Sarajevo. It is located in Baščaršija, Sarači street, in Stari Grad.

Morića Han is considered a true caravanserai because, when operational, it could accommodate about 300 passengers and 70 horses. Evliya Çelebi, an Ottoman traveler, wrote about his visit to Sarajevo in 1659 and described Morića Han as Hadži-Bešir's han, because Hadži-Bešir was landlord of the han then. The modern name probably comes from the surname of the han's tenants at the beginning of the 19th century, Mustafa-aga Morić and his son Ibrahim-aga Morić. However, some sources connect the name of this han with the Morić brothers who participated in rebellions against the Ottoman Empire from 1747 to 1757. The citizens of Sarajevo gathered in Morića Han on July 29, 1878, established Narodni Odbor (English: Peoples Council) and protested against the occupation of Bosnia and Herzegovina by Austria-Hungary.

The han has survived several fires, most recently in December 1957. It was reconstructed from 1971 to 1974 and decorated with Persian calligraphy inscriptions from poems written by Omar Khayyám. Stari Grad returned ownership of Morića Han to Gazi Husrev-Beg's endowment in 1998. Management of the endowment rents the han for business purposes that match the historical context, including a national restaurant, a Persian carpet shop, and religious societies.
Image Courtesy of Wikimedia and Whitepixels.
Sight description based on Wikipedia.