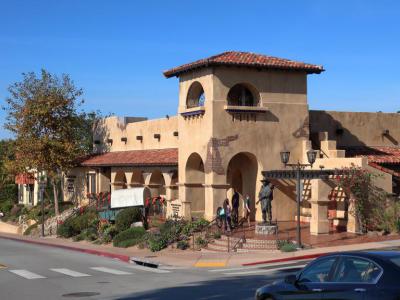 Such a great concept in a new, highly interactive museum with lots to do for people of all ages! The guides and tourists "re-enact" the group of 500 Mormon volunteers that joined the U.S. Military during the Mexican-American War of 1846-48, leaving their Midwestern state of Iowa to blaze the way to the new San Diego, ready to fight if necessary.

The battalion was stationed in Old Town in 1847, and they built wells and a courthouse on the site. In the 1960s, the Church of Latter-day Saints opened a visitor center to commemorate their historical ties to San Diego; the building may be themed like something at Disneyland (so you can tell it isn't an original), but it is very carefully constructed.

Inside, visitors move through different rooms as the docents (who are church missionaries) act out an absorbing theatrical production that combines technology like a movie, with each room acting as a different set. At the end, you can have an old-fashioned photo taken, pan for gold, and climb to an observation tower and see all of Old Town.

A very worthwhile experience and it is all free!