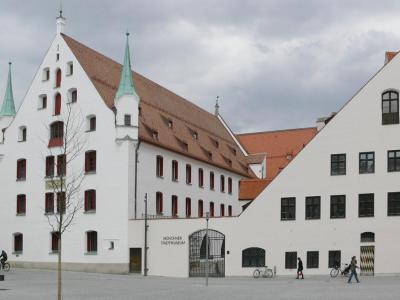 The City Museum of Munich ("Münchner Stadtmuseum") was founded in 1888 by Ernst von Destouches. It occupies a spacious – 2400 m² – complex incorporating the former municipal arsenal, built in 1500, and the adjoining stables, rebuilt after the Second World War, and originally dating to the late Gothic period. The museum provides a detailed overview of Munich's history and its citizens' lifestyle, starting from the early beginnings as the Schwabing Bohème to the 1972 Summer Olympics and the present day.

One of the permanent exhibitions, called “Typically Munich!”, features some 400 objects dedicated to popular arts and traditions of the region, successfully answering three questions: What is typically Munich, Since when, and, above all, Why?

Within the Culture History section, amid the multitude of artworks, you will find the famous Gothic Morris dancers, created by Erasmus Grasser for the festival hall of the Old Town Hall, and the original puttos of the Mary's Column. A wooden model of Munich city, as it was back in 1572, is one of the highlights here.

The so-called Fotomuseum, founded in 1963, showcases the collection of contemporary photographs (more than 500,000) by various artists, including Katharina Gaenssler and Franz Wanner; the Music collection boasts an extensive array of more than 2,000 musical instruments gathered from Africa, America, Asia and Europe.

There is also a Puppet theatre collection and the one on the National Socialism in Munich recounting the history of the city as the former Capital of the Nazi Movement ("Hauptstadt der Bewegung").

The on-site Museum of Film, with its large archive, shows weekly screenings and is well known for restoration of old movies, created by the likes of Fritz Lang, Ernst Lubitsch, Georg Wilhelm Pabst and Friedrich Wilhelm Murnau.