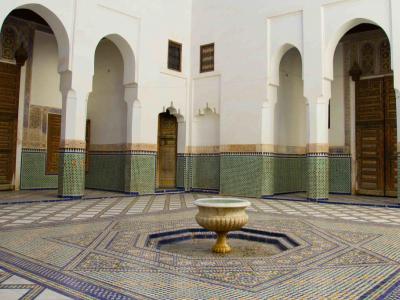 The Museum of Moroccan Art (Musée Dar Si Saïd) is located in one of Marrakech’s most beautiful palaces, and is a calm and interesting place to spend a few hours. The word Dar means “house”, while Si Saïd is part of the name of Si Saïd ibn Moussa, the Minister of War, for whom this palace was built in the mid 19th century and whose brother was the Vizier Bou Ahmed.

By far more than just a simple townhouse, this magnificent building features a number of amenities, such as a superb courtyard full of flowers and cypress trees, a gazebo and a fountain. The exhibition rooms around the courtyard are embellished with intricately carved doors, extraordinary stucco-work and mosaics. In addition to these, visitors can also explore the domed reception room and harem quarters.

The museum collection is considered to be one of the finest in Morocco, with jewelry from the High Atlas, the Anti Atlas and the extreme south; carpets from the Haouz and the High Atlas; oil lamps from Taroudannt; blue pottery from Safi and green pottery from Tamgroute; and leather-work from Marrakech.

But the true jewel of the collection is a 10th-century Spanish marble basin, which was brought to Marrakech by the Sultan Ali ben Youssef in 1120. Initially, he put it in the mosque, even though it carried images of an eagle and griffons carved upon which is contrary to the Islamic law prohibiting decorations depicting living creatures. Eventually, under the Saadian dynasty, the basin was moved to the Ben Youssef Madrasa, and then, after the college was restored, donated to the museum.

Why You Should Visit:
The palace is always worth a visit for its wonderful interior, especially now that is has been renovated.
The main public areas are now filled with antique carpets showcasing the different styles found in Morocco.
If you have no previous knowledge of Moroccan carpets, this wonderful exhibition will give you some valuable insight into the remarkable variety of styles & colors available in the country.