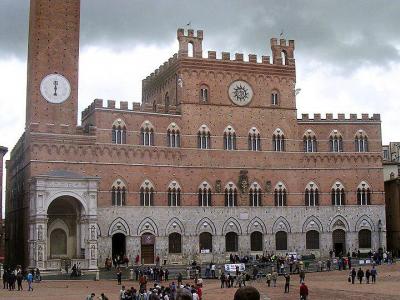 The Civic Museum is on the first floor of the Public Palace and features wonderful works of art. The main attraction is different rooms adorned with elaborate frescoes. Don't miss Simone Martini's 1315 Virgin Mary in Majesty and Ambrogio Lorenzetti's Allegories of Good and Bad Government.

On the second floor of the museum, you'll find the Sala del Risorgimento. This 19th-century fresco depicts the reunification period. In the Military Court, father and son artists Spinello and Parri Aretino recreate the life of Pope Alexander III. Pope Alexander III was born in Siena and was Pope from 1159 to 1181.

In the Hall of the World Map, you'll find the knock-out Virgin Mary in Majesty fresco by Simone Martini. The Hall of Nine is the room where the Council of Nine met; here, you will find one of the most important secular paintings of the time. The Allegories of Good and Bad Government was painted in 1339 by Ambrogio Lorenzetti and shows Justice, Wisdom, Virtue, and Peace scenes.