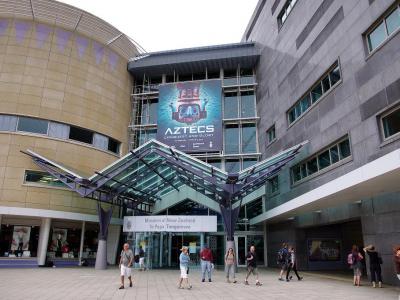 Te Papa Tongarewa translates literally to "container of treasures" or in full "container of treasured things and people that spring from mother Earth here in New Zealand". Te Papa's philosophy emphasises the living face behind its cultural treasures, many of which retain deep ancestral links to the indigenous Māori people.

The long term exhibitions of cultural objects focus on New Zealand history, Māori culture and New Zealand's natural world. The hands-on and interactive exhibitions focus on engaging particularly young visitors and include both indoor areas and out-door areas built and planted for the purpose.

All permanent exhibitions are free.

The museum has sometimes been the centre of controversy. The siting of significant collections at the water's edge on reclaimed land next to one of the world's most active faults has resulted in concern by some people. There has been criticism of the "sideshow" nature of some exhibits, primarily the Time Warp section, which has closed. There has also been criticism that some exhibits were not given due reverence. For example, a major work by Colin McCahon was at one stage juxtaposed with a 1950s refrigerator in a New Zealand culture exhibition.

The Maori name of the museum has caused controversy, too. In 1989 the Maori iwi Te Āti Awa, located near Wellington, requested that the Ngāti Whakaue iwi grant a name to the museum, which resulted in the Ngāti Whakaue bestowing the name Kuru Tongarerewa, an ancient ceremonial name important to the iwi evoking spiritual, historical, and cultural importance. However, the name eventually adopted by the museum caused offense by being a modification in the form of Te Papa Tongerewa. Meetings between the museum's board and the Ngāti Whakaue led to promises that the name would be changed to Te Papa Kuru Tongererewa, however the change did not occur.

Opening hours: Daily 10 am − 6 pm (except Christmas Day).
Image by Jan Helebrant on Flickr under Creative Commons License.
Sight description based on wikipedia