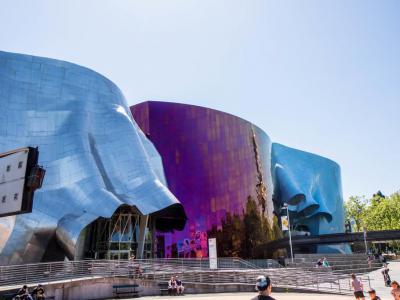 Museum of Pop Culture / Sci-Fi Museum and Hall of Fame, Seattle (must see)

The Museum of Pop Culture or MoPOP (previously called EMP Museum) is a nonprofit museum dedicated to contemporary popular culture. It was founded by Microsoft co-founder Paul Allen in 2000 as the Experience Music Project. Since that time, MoPOP has organized dozens of exhibits, 17 of which have toured across the US and internationally.

At first, the EMP Museum did not succeed financially and the Sci-Fi Museum & Hall of Fame was established in 2004. Although the latter as a permanent collection was de-installed in March 2011, a new exhibit named Icons of Science Fiction took its place in 2012, at which time the new Hall of Fame display was unveiled. Nominations are submitted by the public but the selections are made by "award-winning science fiction authors, artists, editors, publishers, and film professionals."

A 140,000-sq-ft (13,000 m2) building, designed by Frank O. Gehry, MoPOP houses several galleries and the Sky Church, which features a Barco C7 black package LED screen, one of the largest indoor LED screens in the world. Exhibits cover pop culture, from the art of fantasy, horror cinema, and video games to science fiction literature and costumes from screen and stage. Fans of Seattle musicians Nirvana and Jimi Hendrix will also want to browse through the largest collections in the world of artifacts, hand-written lyrics, personal instruments, and original photos celebrating their music and history.

With interactive activities included in galleries like Sound Lab and On Stage, visitors can explore hands-on the tools of rock and roll through instruments, and perform music before a virtual audience. Furthermore, they can experience IF VI WAS IX, a guitar sculpture consisting of more than 500 musical instruments and 30 computers that makes for a great photo op!

Why You Should Visit:
A good idea for a museum, and the design and architecture are also worthy of notice.

Tip:
Either get a CityPass (available inside) or a combo ticket to the Space Needle and Chihuly's Garden and Glass exhibit to bring the price down. If you're short on time, dare to ask when buying ticket/s if there's a way to reenter the following day.