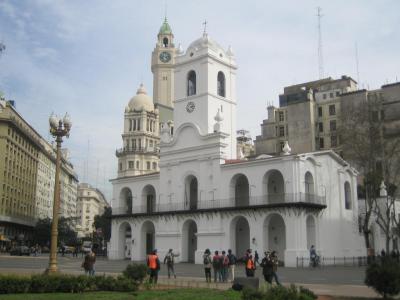 Museum of the Cabildo and the May Revolution, Buenos Aires

The National Museum of the Cabildo and the May Revolution tells the story of the Spanish colonial rule in Argentina and the May revolution that ended Spanish supremacy in the country. It is a repository of government and revolutionary exhibits from the 18th century.

The Cabildo that houses the National Museum of the Cabildo and the May Revolution was a former residence of the Spanish Viceroy built in 1764. It became the city hall after Argentina declared independence from the Spanish Crown after the May revolution in 1810. The revolution took place in the Plaza in front of the Cabildo. It is one of the few colonial buildings still standing in Buenos Aires. Its original columns and facades were destroyed to make way for two major avenues and the present structure is the result of a reconstruction in 1940 based on the design of architect Mario Buschiazzo.

Exhibits at the museum include paintings, artifacts, weapons, maps, documents, costumes, jewelry and photographs from the 18th century when the May revolution took place. An ornamental well constructed in 1835 is the only surviving part of the original Cabildo after the 1940 reconstruction. A crafts fair is held on Thursdays and Fridays in the courtyard.

Why You Should Visit:
Entry is free, and inside are a number of rooms detailing the colonial history of the city, with a large number of artifacts.
They have cards in English that give the translation of all the signs and information.

Tip:
Don't forget to go upstairs for good views of Plaza de Mayo and all the surrounding buildings.