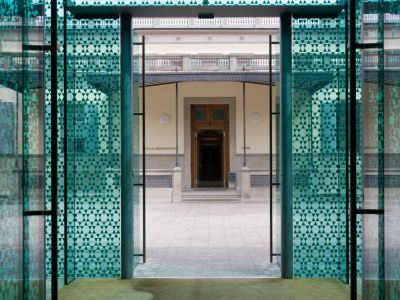 The Rietberg Museum in Zürich is the only non-European art gallery in Switzerland. It features works from Africa, Asia and the ancient Americas. The goal of the museum is to make the visitor aware of the diverse type of artistic expression that can be found outside of Europe. The museum was founded on the private collection of Baron Eduard von de Heydt. The physical location of the museum dates back to the purchase of the Rieterpark and Wesendonck Villa, a Renaissance mansion, by the city of Zurich in the 1940s. The museum is located in Reiterpark and stretches across several historic villas. The city purchased the adjacent Shonberg Villa in 1976 and expanded the museum. The Remise Villa and the Rieter Park-Villa were later additions. A fifth building was opened in 2007 and is primarily underground. This building is called The Emerald and features a wall of green glass at the same height as the historic villas. Instead of creating a tall building that would be out of scale, the architects opted for an underground extension. This expansion more than doubled the museum’s space. In addition to the permanent collection, the museum shows rotating exhibits.

Why You Should Visit:
Culture and spirituality from around the world in beautiful surroundings.
Some of the ancient artifacts going back several centuries BC or more are quite impressive.
Various types of decorative arts as well, so everyone is sure to find something to their taste.

Tip:
Admission fee is collected for the collection/exhibition but the garden is free – you may as well spend a whole day on the grass.

Zurich offers many activities for kids of all ages. There are shops for those who have just started their life journey with a lot of safe and enjoyable toys and games, boutiques with exclusive clothes, and, of course, sweet shops with original Swiss chocolate. Visiting the city’s museums, kids will learn about the history and culture of Switzerland, and the puppet theater will entertain with...  view more