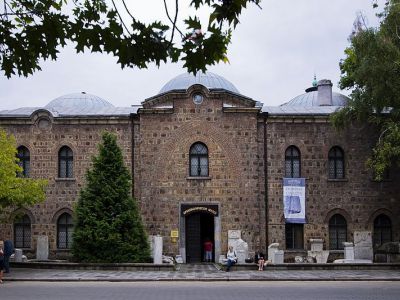 The largest and oldest Ottoman mosque in the city of Sofia, Koca Mahmut Pasha Camii, was the creation of Grand vizier Veli Mahmud Pasha. Mahmud was a child of the Byzantine Angelos family of Thessaloniki. He was captured by Ottomans when he was a boy and raised as a Muslim. Because of his service in the siege of Belgrade in 1456, he was made Vizier which is a high official in Ottoman empire.

Mahmud pasha died in 1474. The mosque was completed in 1494. In 1880 the mosque, like Mahmud, was captured but unlike other mosques, it did not become a church. It became a library and then a museum. The National Museum was established in the old mosque in 1893. Its first director was Czech Archeologist and scholar, Vaclav Dobrusky.

The museum still uses the ancient stone building of the mosque in spite of unfavorable conditions of humidity in the summer. New halls were added on to the museum during the years. There are five exhibition halls: Central, Prehistory, Middle Ages, Treasure, and a special hall for temporary exhibitions. All managed by the Bulgarian Academy of Science.

In the lower floor of the north wing the Prehistory hall holds items from 1,600,000 BC to 1,600 BC. The Treasury Vault hold rare and precious items from the Bronze Age to late Antiquity. The Main Hall has diverse collections of ancient Greece and Rome. The Medieval Section is on the second floor of the main building.