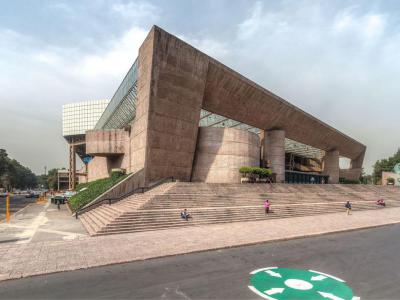 Auditorio Nacional (Spanish: 'National Auditorium') is an entertainment center in Mexico City right in front of the Polanco hotel zone next to Campo Marte. The National Auditorium was completed in 1952. It is one of the most important performance and concert centers in Mexico City. In May 2007, the American magazine Pollstar ranked the National Auditorium as the best concert venue in the world. The auditorium was once a sport venue, which hosted volleyball and basketball matches of the 1954 Central American and Caribbean Games. It was the venue for the gymnastics events at the 1968 Summer Olympics. Nowadays, this amazing architectural site is used primarily for international music, song, dance and film festivals, fairs and exhibitions. It was designed by Mexican architects Pedro Ramírez Vázquez and Gonzalo Ramírez del Sordo, and remodeled by Abraham Zabludovsky and Teodoro González de León. It also has a small venue available for smaller events, called Auditorio Lunario, total seating capacity is just under 10,000. In 1990, the auditorium went through some reconstruction which brought it to the current design. Auditorio Nacional houses the largest pipe organ in Latin America.
Image by Daniel Lobo on Wikimedia under Creative Commons License.
Sight description based on wikipedia

Mexico City is one of the most dazzling cultural sites in the world, having more museums than any other city. Mexico City also has a rich history of artistic expressions. It was home to the Aztec civilization and the Spanish Empire both of which have left behind an impressive heritage and a unique culture.

Zona Rosa, or The Pink Zone is one of the Mexico City's famous neighborhoods. It is located near the historic center of the city. The neighborhood was called the Pink Zone because of the pink tiles that are prevalent here. The area offers amazing Beaux-Art architecture, the city's best handicraft markets and antique shops. Take this walking tour to discover the beauties that Zona Rosa...  view more