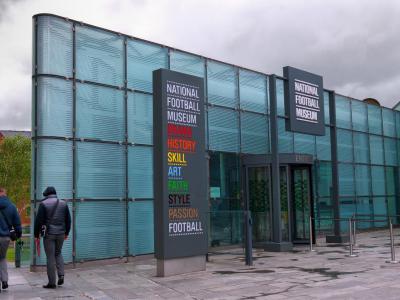 The National Football Museum is a museum at the Urbis building in Manchester city centre, founded to preserve, conserve and interpret important collections of football memorabilia. The museum was originally in Deepdale, Preston, Lancashire, but moved to Manchester in 2012. The National Football Museum holds a huge collection of football exhibits and memorabilia in a four-story building, and is the largest museum dedicated to the game of football in the world.

Here you will learn how football became the pass time of our lives. There are hundreds of fascinating photographs, memorable videos, and historic objects on display, including shirts worn by football greats such as Pele, Stanley Matthews, Diego Maradona and others.

The museum is very well-curated for visitors for learning the history of football as a game and the story behind the World Cup. For fun stuff, there is a penalty shootout zone for kids, so they can have hands-on, or more appropriately feet-on, experience of trying a penalty kick.

If you are football fan, the National Football Museum is a must-visit experience when in Manchester.