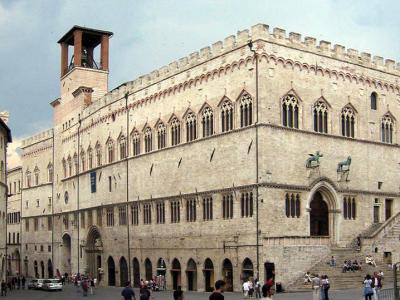 The National Gallery of Umbria is housed in the Palazzo dei Priori. Its collection comprises the greatest representation of the Umbrian School of painting, ranging from the 13th to the 19th century, strongest in the fourteenth through sixteenth centuries. The collection is presented in twenty-three galleries in the Palazzo.

The origins of the collection lie in the founding of the Perugian Accademia del Disegno in the mid-16th century. The Academy had its original seat in the Convento degli Olivetani at Montemorcino, where a collection of paintings and drawings began to be assembled. With the suppression of religious houses imposed by the Napoleonic administration, and imposed once again by the united Kingdom of Italy, much of the heritage of Italian art that had come to be the property of the Church became the property of the State.

In 1863, the civic paintings collection was formally named to commemorate Pietro Vannucci, but the problem of establishing an appropriate site to house the collection was not solved until 1873, when it came to be housed on the third floor of the Palazzo dei Priori, in the center of Perugia. With the addition of acquisitions, donations and bequests, the pinacoteca became the Regia Galleria Vannucci in 1918, under the patronage of the king.