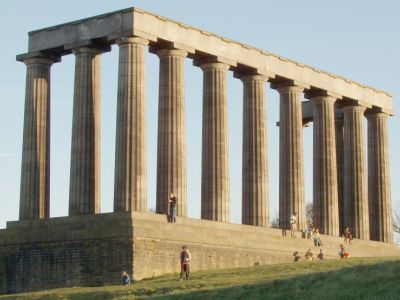 The National Monument stands in its unfinished splendour on Calton Hill and has been called a lot of names over the years, such as “Edinburgh’s Folly” or “The Shame of Scotland”, although the idea behind it was neither folly nor shame.

In fact, the idea was quite noble – to commemorate the Scottish soldiers and sailors died during the Napoleonic Wars of 1803-1815; the only problem was that, when asked for their money to be put where they mouths were, many a people lost their initial enthusiasm for the venture.

The monument was designed in 1823 by William Henry Playfair and Charles Robert Cockerell, who modelled it on the Athenian Parthenon, and right from the outset it was pretty obvious that they had set their sights a bit too high. They kept fiddling with the design and changed it repeatedly until producing a final draft in 1826.

Construction started in 1826 and saw 12 columns built along with the foundations and the inscription which happened to be rather ironic: “A Memorial of the Past and Incentive to the Future Heroism of the Men of Scotland”.

Funds finally ran out completely in 1829 and the monument you can see today hasn’t been touched ever since. Several proposals have been put forward over the years to complete it, but these plans have never materialized.
Image by Stuart Caie on Wikimedia under Creative Commons License.