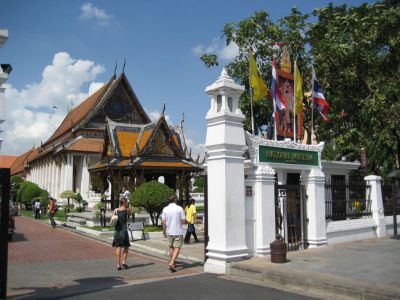 The National Museum Bangkok features exhibits of Thai art and history all the way back to Neolithic times. Opened in 1874 by His Majesty King Rama V, this is the first public venue to display the royal collection of King Rama IV and other objects of general interest. The museum occupies the 18th-century Wang Na Palace, which had previously been the residence of the Prince Successor. Originally, it was intended to exhibit the antiques and gifts bestowed to Rama V by his father.

First named the Bangkok Museum, opened by King Rama VII in 1926, the institution had subsequently been transformed, under the direction of the Department of Fine Arts, into the National Museum Bangkok by 1934. Initially a non-organized gathering of dusty relics, it now features exhibits arranged into three areas consistent with Thai history. A good English-language description is provided for all artifacts.

The Thai History Gallery, covering the periods from Sukothai to the Rattanakosin, is found at the front of the Sivamokhaphiman Hall. The Archaeological and Art History Collection features items from the prehistoric period to the modern Kingdom, including many ancient sculptures. Decorative Arts and Ethnological Collection showcases Chinese weaponry, gold treasures, precious stones, masks and many items of historical importance from all over Southeast Asia. Other exhibits include a funeral chariot hall, featuring carriages used for royal cremations, along with many excellent examples of Thai architecture.

Tip:
There are excellent free tour guides in English, French (Wed, Thu), Japanese (Wed) and German (Thu) at 9:30am.