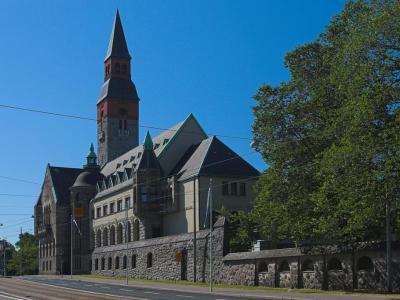 The National Museum of Finland recounts Finnish history, from the Stone Age to the present day. Its building is one of the most remarkable examples of the Finnish national romanticism. The latter is notable for the grey granite stonework and green tinged copper roof seen in the medieval churches and castles throughout the country. The interior is mainly art nouveau.

Designed by the architect firm Herman Gesellius, Armas Lindgren and Eliel Saarinen, the museum took five years to build, from 1905 to 1910, and opened to the public in 1916. It was named the Finnish National Museum only after Finland's independence in 1917. Bullet holes from the Civil War that erupted a few years later are still visible in the museum doors. The main entrance is notable for the famous ceiling frescoes depicting scenes from the national epic poem Kalevala, painted by Akseli Gallen-Kallela.

The museum's permanent exhibition is divided into sections, such as coins, medals, decorations, silver, jewellery and weaponry. 'The Prehistory of Finland' displays a collection of antiquity dating back to the Stone Age. There are also exhibits on the history of Finland from the Middle Ages to the early 20th century, including the Swedish Kingdom Period and the Russian Empire Era preceding the age of industrial revolution.

One of the favorite exhibits within the museum is the hands-on, interactive VINTTI section. Among other features, it offers preview to all the six permanent exhibition sections.

Why You Should Visit:
The entire museum is quite engaging. This engagement will keep you there for a while as you go through the different periods of Finland, rising from the bottom of a sea to what it is today.

Tips:
The exhibits are extensive, so allow yourself at least 3-4 hours to see all.
Easy to spend the whole day with a family, as there is a restaurant on site. Younger guests must be accompanied by an adult at all time.