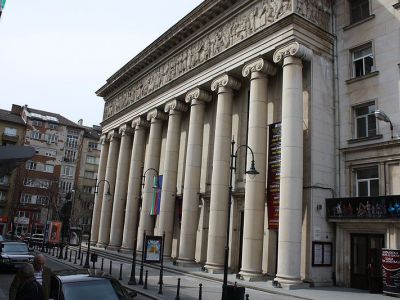 The National Opera and Ballet is a national cultural institution in Bulgaria that covers opera and ballet. It is based in an imposing building in Sofia. The first opera company in Bulgaria was founded in 1890 as part of the Capital Opera and Drama Company. The two sections split in 1891 to form the Salza i Smyah theatrical company and the Capital Bulgarian Opera. It was, however, disbanded the next year due to lack of government funding and financial difficulties.

The Bulgarian Opera Society was established in 1908 and staged its first test performance. The first full opera was performed in 1909 — Pagliacci by Leoncavallo. As the company evolved under the ensemble system and style, the permanent troupe of soloists, choir, orchestra, ballet, technical and production teams produced up to 10 opera and ballet premieres a year, in addition to concert programs. 20th Century performers such as Nicolai Ghiaurov, Nicola Ghiuselev, and Ghena Dimitrova began their careers within the structure of the National Opera, as did later singers such as Irena Petkova. The National Opera and Ballet's building was designed in 1921 and built for the most part between 1947 and its opening in 1953.
Image by Apostoloff on Wikimedia under Creative Commons License.
Sight description based on wikipedia