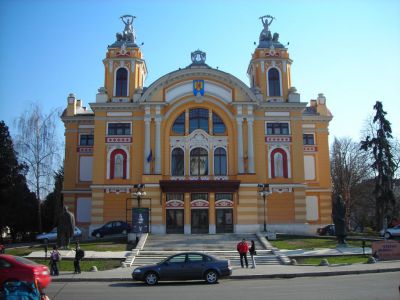 The Lucian Blaga National Theatre is one of the most prestigious theatrical institutions in Romania. The theatre shares the same building with the Romanian Opera. The theatre was built between 1904 and 1906 by famous Austrian architects Ferdinand Fellner and Hermann Helmer, who designed several theatres and palaces across Europe in the late 19th century and early 20th century, including the theatres in Iaşi, Oradea, Timişoara and Chernivtsi (Romanian: Cernăuţi). The project was financed entirely with private funds. The hall initially had a capacity of 928 places, being conceived in the Neo-Baroque style, with some inflections inspired by the Secessionism in the decoration of the foyer. Between 1950 and 1956 the stage house was extended to 1200 seats.
Image Courtesy of Wikimedia and ES Vic.
Sight description based on Wikipedia.