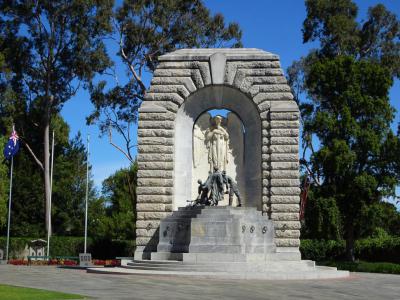 The National War Memorial is a monument commemorating the Australians who fought in the First World War. It was opened in 1931, funded by the State Parliament, thus becoming the first Australian state war memorial to be confirmed after the war.

Created by the architectural firm Woods, Bagot, Jory & Laybourne-Smith, the design—effectively a frame for two scenes depicted through Rayner Hoff's marble reliefs and bronze statues—shows the prelude and the epilogue to war. It illustrates both the willingness of youth to answer the call of duty and the extent of the sacrifices they made. In this, the work is not displaying a material victory, but rather a victory of the spirit.

Although the memorial was initially intended for the South Australians who served and fell in "The Great War" (nearly 35,000 and more than 5,000 respectively), parliament decided that it should be referred to as the "National War Memorial", in spite of the term already being used to describe the memorial to the South African War of 1899–1902.

Construction of the memorial began in 1928 with the cut and placement of marble blocks from Macclesfield and Angaston. The National War Memorial in South Australia became the fourth state World War I memorial to be opened when it was unveiled in 1931. In 2001, its 70th anniversary was marked by a three-month remedial project, set to restore the bronze and stonework details and reinforce the foundations. The work was completed just days before the Remembrance Day services.
Image Courtesy of Flickr and denisbin.
Sight description based on Wikipedia.