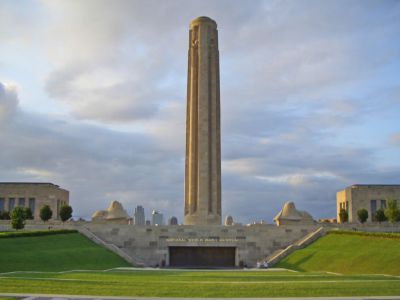 The ground was broken for the Kansas City WWI Memorial in 1921. Witnessed by more than 100,000 people, the ceremony was performed by the supreme Allied commanders. It was the first time that these five people had ever come together in the same place. The monument was dedicated in 1926 by President Calvin Coolidge. Congress officially named it the nation's WWI monument in 2004, at which time the grounds were expanded to build the Edward Jones Research Center. But as far back as opening day, President Coolidge had referred to it as the national monument to the Great War.

The central feature of the museum grounds is the National World War I Monument, the 265-foot tall Liberty Tower. Lighting effects make the top of the tower look like a flame is burning at night. The view from the tower's top of Union Station and downtown Kansas City is worth the trip alone. The museum grounds surround the tower, with two exhibit halls and two unseeing Sphinxes. The buildings and monuments are designed in the Eqyptian Revival method.

Why is the national WWI monument and museum located in Kansas City? Kansas City was experiencing a massive boom at the time the war broke out. It was that year, in 1914, that the city opened its new Union Station. During the war, grains and corn grown in the area were shipped overseas, and thousands of troops passed through Union Station on their way to deployments. The city felt deeply connected to the war effort, and when the armistice was signed in 1918, a huge victory parade filled the city's streets. Within weeks, city leaders and philanthropists had begun fundraising for the memorial.

- Two galleries highlight WWI–one focuses on the war before the US entered, and the other focuses on the US's military and peacemaking efforts.
- The museum hosts many exhibits and memorabilia from the period, including a Model T ambulance and replica trenches. They have the world's most comprehensive collection of WWI artifacts.
- The museum and monument are dedicated to the soldiers who served in the war. Upon entry, you pass a field of 9,000 red poppies—each poppy represents 1,000 soldiers' deaths.

- Check out the museum's website for information on rotating exhibits, special events, and film screenings.
- The panoramic views from the top of the Liberty Monument are breath-taking. Take the time to appreciate the iconic buildings that make up Kansas City's skyline, including City Hall, Union Station, and the Power and Light Building.
- Don't miss grabbing lunch in the Over There Café, where you can eat like a soldier, with decor that features flags and music from the time.