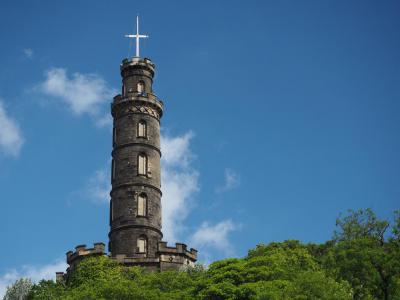 Another monument worth visiting, while on Calton Hill, is the Nelson Monument. It honours Horatio Nelson’s victory at the Battle of Trafalgar in 1805 and his subsequent death from wounds sustained during that battle.

The monument was put up in 1815 on the highest point of the hill, on the site where a mast was once used to send signals to ships entering the Firth of Forth. It was designed by architect Robert Burn in the appropriate form of an up-ended telescope. The monument stands 32 metres high and its 143 stairs lead to the public gallery, from where one can enjoy a wonderful view of the city and the Firth.

In 1853, the Astronomer Royal of Scotland, Charles Piazzi Smith, commissioned a time ball to be placed on top of the monument. The ball was connected to the City Observatory by an underground wiring system. Each day, just before one o’clock in the afternoon, the ball was raised and at 1pm precisely it was lowered. Ships in the Firth set their marine chronometers by the time ball. Accurate time-keeping helped sailors determine their longitude once they were at sea.

The time ball remained in use until 2007 when it was damaged in a storm. It was restored and brought back into use in 2009, but now, with the City Observatory closed, the raising and lowering of the ball is done mechanically from a room at the bottom of the monument.

Why You Should Visit:
The stair takes a while and the parapet at the top is very narrow; still, the photo shots of Princes Street and open sea down below, taken from here, are really stunning and well worth it.

Tip:
£5 to access the stairs to the top; admission is free at the museum at the foot of the tower.