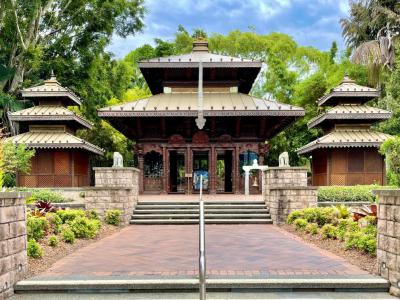 The Nepal Peace Pagoda is one of the most significant heritage items in Brisbane from the hosting of the Expo. It is the only international exhibit remaining on the site. In 1986, the United Nations International Year of Peace, the Kingdom of Nepal agreed to participate in World Expo '88, and the Association to Preserve Asian Culture was commissioned to create, operate for the Expo, and find a new home for the Pagoda at the Expo's conclusion.

The Peace Pagoda was built by German architect Jochen Reier (APAC) on behalf of the Kingdom of Nepal. Immediately, 80 metric tons (79 long tons; 88 short tons) of indigenous Nepalese timber were sourced from the Terai jungle forest of Nepal, carted across to the capital Kathmandu where 160 Nepalese families worked for two years at crafting its diverse elements. These were then shipped to Australia in two 40-foot (12 m) containers and one 20-foot (6.1 m) container, where they were assembled at the Expo site by a handful of Australian workers under Nepalese supervision. The final assembly for World Expo 88 Expo 88 Brisbane only took a few days.

The Pagoda is one of only three Nepal Peace Pagodas outside of Nepal, the other two being in Munich and Osaka, and is a close copy of Pashupatinath Temple in Kathmandu, with significant Hindu and Buddhist iconography representing the different Avatars of Shiva, buddhas in different states of meditation, or mudras, the eight auspicious symbols of Buddhism, a sacred statue of Avalokiteshvara, the Buddhist deity of compassion, as well as a Peace Bell, two smaller side Pavilions, a Buddhist stupa, and a Peace Post, with the calling to World Peace in four languages Japanese, French, Spanish and English. Sanskrit prayer chants also feature inscribed on the roof eaves of the two side Pavilions, as well as the inscription for om above the central door.

Whilst not used as a traditional Buddhist or Hindu centre, it is occasionally used for weddings, private functions, book launches and company events, and many visitors can be seen using the Pagoda's internal first level Church pews for personal meditation.
Image Courtesy of Wikimedia and Kgbo.
Sight description based on Wikipedia.