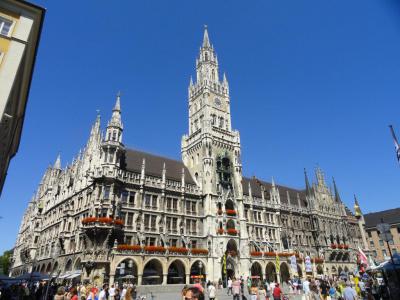 The New Town Hall was built in the 19th century, at a time when the city of Munich enjoyed great prosperity. The Old Town Hall was too small to accommodate the local government, so a new Hall had to be constructed.

The site for it was chosen right there nearby, and to clear space, twelve buildings had to be demolished. The Hall was erected between 1867 and 1908, designed by young architect, Georg Hauberrisser, who was only 24 at the time.

The building features Gothic Revival style, has 400 rooms and covers area of more than 9,000 square meters. Overlooking Marienplatz, it also has a small garden at the back, called the Marienhof. In the basement there is the Ratskeller restaurant, and the first floor balcony is often open to visitors to observe sporting events and concerts that are taking place in Marienplatz from time to time. The 85-meter main tower of the Hall is served by elevators.

Another key attraction here is the mechanical, two-level Glockenspiel (Carillon) consisting of 43 bells and 32 life-sized figures, dating from 1908. Each day at 11am and 12pm, as well as at 5pm during summer, it chimes and re-enacts two stories from the 16th century. The first one is of marriage of local Duke Wilhelm V to Renata of Lorraine. In honor of the couple there is a joust with life-sized knights on horseback representing Bavaria (in white and blue) and Lothringen (in red and white). The Bavarian knight always wins, naturally.

The second story is called Schäfflertanz (the coopers' dance). Set in 1517, the year of plague in Munich, according to myth, the coopers, loyal to the duke, danced through the streets to "bring fresh vitality to fearful dispositions." Their dance came to symbolize perseverance in difficult times. By tradition, the dance is performed in Munich every seven years during Fasching (German Carnival). Described in 1700 as "an age-old custom", the current dance moves were defined only in 1871, though.

The entire show lasts between 12 and 15 minutes, depending on the tune played that day. At the end, a small golden rooster at the top of the Glockenspiel chirps quietly three times, marking the conclusion of the spectacle.
Image Courtesy of Flickr and Damien.
Sight description based on Wikipedia.