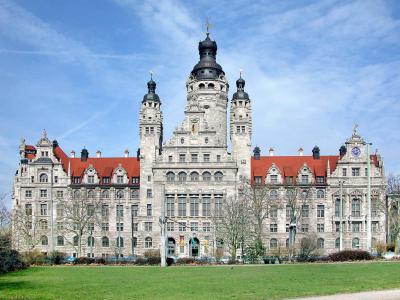 Since 1905 Neues Rathaus (New City Hall) has been the seat of Leipzig’s city council. After several plans were rejected, the city was acquired by the Kingdom of Saxony in 1895, the Pleissenburg site to build the new city hall of Leipzig. Several design competitions were held, a condition of which was that the silhouette of the Pleissenburg tower, a known landmark, be preserved. On the southwest facade are five statues by different artists, including Adolf Lehnert and Joseph Magre. Its clock contains the Latin inscription "Mors certa, hora incerta" (Death is certain, the hour uncertain).
Image by Manecke on Wikimedia under Creative Commons License.