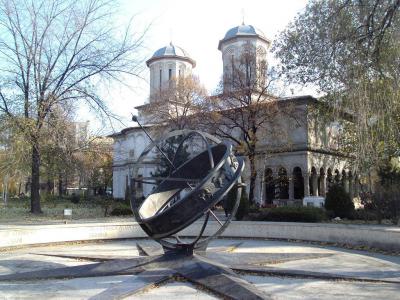 Situated between Unirii Square and Universitatii Square, the New Saint George Church was built during the rule of Constantin Brâncoveanu in Wallachia.

In 1705, Constantin Brâncoveanu demolished a fifteenth century church and built on its site a new one. Craftsmen Vucaşin Caragea, Manea and Pârvu Mutu worked on the project under the guidance of architect Veseleil. A fire in 1718 devastated the monastery and its khan. The restoration works were carried out under the supervision of the ruler, Ioan Mavrocordat. The earthquake of 1802 destroyed the vaults and the domes, and the church was later restored without domes. After the fire of 1847, the New Saint George Church was repaired in 1851 by architect Xavier Villacrosse, assisted by painters Misu Popp and Constantin Lecca.

The present church has a porch with 7 front and 3 side arches supported by columns with floral capitals raised on a fretted parapet. The narthex is square with 4 columns that support a central dome. The passage to the nave is separated by 3 arches that lean on columns. Then a narrower area comes, the crypt, covered with a large arch. The second bigger octagonal tower is placed over the nave with bossy side apses.
Image by Jim under Creative Commons License.