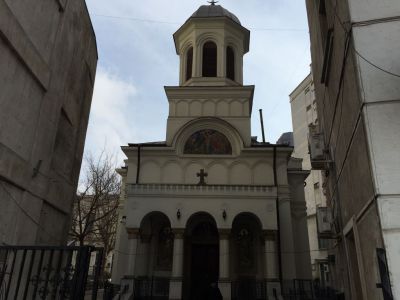 Located at the crossing of Corneliu Coposu and I.C. Bratianu Boulevards, the New Saint John Church was erected in 1756 by Ionita Croitorul, leader of the the old furriers and dyer guilds. The church has had different names over the years, including “St. John Church from the Square (Rom: Biserica Sfantul Ioan de la gura Pietii)”, “The New St. John Church near Beilicului Bridge (Sfantul Ioan cel Nou din Podul Beiliculu)” and “St. John of Parscoveanul (Sfantul Ioan al Parscoveanului)”, each of which referred to a certain location near the great properties of the steward Stefan Parscoveanul, who took care of this place and restored it in 1790.

In 1818, the New St. John Church was rebuilt by a group of people led by the monk named Ioanichie. In 1847, following the Great Fire, during the rule of Gheorghe Bibescu, the building was restored by the leader of the dyers, Iordache. In 1878, the church was painted by certain artist Serafim.

The church represents a rectangular shaped nave with two towers. A single apse of the altar is connected to the aisle by two pseudo-apses. Four columns support the arches that, in their turn, sustain the twelve sided dome with a square base.

A mosaic-icon, depicting the Baptism of the Lord, is seen on the church's tower bell. The interior painting is divided into panels on the background painted in white oil. On the west wall of the narthex, there is a small stone cross with the Romanian inscription reading, “Resting here are the remains of some of the [church] founders, interred here at the moving of the church in 1986”.
Image Courtesy of Jim.